Chania Market and the Cretan diet 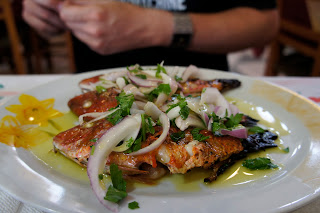 I’d always thought the notion of ‘Mediterranean diet’ a rather blunt concept with such a diversity of cuisines in the region (none of which I dislike!)
But it actually refers specifically to the findings of one of the most important studies on nutrition ever conducted – and while there are many commonalities across the Med, the archetypal diet of the findings is in fact the Cretan diet.
In the 1960s Dr Ancel Keys, a well-known US physician, was considering a nutritional conundrum: in economically booming America heart disease was striking high numbers of well-fed middle-aged men, while in the poorest parts of agrarian southern Europe where nations were still in recovery mode from WWII, heart disease was virtually non-existent. 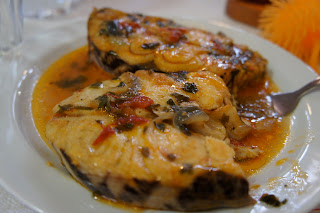 Keys’ seminal seven-countries study published in 1980 showed that people from Crete (the area of Greece selected for the study) had the lowest rate of death from heart disease (9 deaths per 100,000 compared to the highest, Finland, 466 deaths per 100,000) and this protection was due to their diet. Many studies since have developed and refined the science, and the Mediterranean diet has been popularised internationally.
The diet that Keys studied saw the Cretan eat a reasonably high level of fat (but from olive oil, little from meat), a lot of fruit, vegetables, yogurt, nuts, fish and wholegrain bread, and moderate amounts of cheese and wine.
There’s no better place to experience the abundance of the Cretan diet than the substantial Chania Municipal Market. With its 76 stalls, a wander through here is an immersion in the bounty of Crete. This market is an elegant indoor agora, shaped like a cross and opened in 1913 as part of the celebrations for the reunification of Crete and Greece.
Before we started with the healthy stuff though, we couldn’t walk past the excellent bread shop at the entrance to sample flaky cheese pies and chocolate walnut baklava. They had a huge selection of chunky sourdoughs, barley toasts (rusks) and other fresh and dried breads (more the cereals of Keys’ preference than baklava and pies probably!)
One side of the market is given over to seafood; here it opens out towards the port, and fishmongers studiously refresh their fish with cans of cold water every few minutes. In the Keys study only the Japanese ate more fish than the Cretans.
At various cheesemongers whole round hard cheeses stacked at the front of while soft fresh sheep and goats cheese is dished up behind the counter, and the fridge is full of terracotta dishes of fresh yogurt of different levels of richness.
The Cretans ate nearly 4 times as much fruit as Americans in the original diet. Fruit and vegetables are plentiful and delicious. Here at the greengrocers were colossal pumpkins and watermelons, great juicy tomatoes, cucumbers, aubergines, large waxy potatoes, deep wild greens, sweet apricots and peaches.  When I asked for bay leaves I was offered a whole branch 30cm long.
Typical dried goods stores offered herbs, fresh and dried, nutmegs, almonds, pistachios, walnuts and pretty jars of dark clear honey. Antioxidants galore. Perhaps most prized of all deep green extra virgin olive oil on tap rom some of Crete’s supposed 30 million trees. It’s all produced mechanically, not chemically, and is the ‘elixir’ of the Cretan diet: good fat, not bad. Dipping bread into the combination of tomato juice and olive oil at the bottom of a salad bowl is the best way to finish a meal. 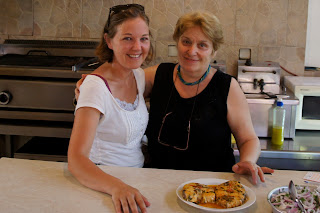 We concluded our visit to Chania Market with a stop at one of the restaurants that line one side. We were lured by a stand (and its gregarious owner) with incredible seafood dishes on display, and decided we couldn’t leave without trying the fruits of the sea cooked to perfection with other components of the famous Cretan diet! I had swordfish with olive oil, mint, tomato and lemon served with boregi pie (courgette, potato, mizirtha cheese and mint with a thin pastry top) – absolutely divine, and prepared by the owner’s mother who took time from bustling around the open kitchen to have her photo with me.
30 years on from Keys’ study some negative health stats encroach on the typical diet: for example, Greek children have the highest obesity rate in the EU. Maybe that’s due to the economic boom and cultural changes of that period introducing more sedentary lifestyles – not needing quite so much olive oil – but especially imported junk food habits.
Nevertheless the bounty of natural produce and the impressive scientific profile of those foods identified in the Keys study remain. Food seems to slip so effortlessly from producer to consumer, making the food supply chain highly transparent – anything you see growing you’ll be able to buy, if not on the side of the road then at the local store or market a few miles away.